If you’ve been following my work for a while, you’ll be well aware that I love animals. I especially love wildlife and animal photography. So, of course, when my kids suggested that we head to West Midland Safari Park for the day, I was more than happy to oblige!

The safari park at West Midlands is set out in such a way where you have plenty of times to set up the perfect shot, just as long as the animals are behaving! There are plenty of places to pull over, so more than enough time to frame your shot and ensure your settings are spot on before clicking the shutter.

It goes without saying that several of the animals are behind fences, but with careful positioning, and some clever aperture settings the fences aren’t much of a problem! This especially came in handy with the tiger as you’ll see below!

The most tricky thing when it comes to wildlife and animal photography is the behaviour of the animals. Obviously you can’t predict how an animal is going to behave, so more often that not you need a lot of patience to ensure you get the shot you want. With the tiger above for example, I knew that I wanted a shot of him staring straight into the lens. It took a few attempts, and a lot of waiting around but we eventually got the shot!

And as if my magic, here’s an example of a shot I wasn’t too happy with. I desperately wanted a shot of the white tiger staring at the camera too, a nice companion image to the tiger above. But the white tiger just wasn’t playing ball. When we pulled up alongside him, he was enjoying his afternoon nap facing away from us. So again, after a lot of waiting and a bit of patience, I ended up with this shot. I’ll be the first to admit it’s less than perfect but it does nicely sum up his attitude to having his photo taken!

For years now, I’ve wanted to teach myself wildlife photography, and more specifically I’ve wanted to take some amazing photographs of wild deer. I mean, it’s great going to Longleat and feeding them from your car but those deer are very used to people and flock to you for food. What I wanted was deer in the wild, and that’s a much bigger challenge.

I often walk my dog in a lovely bit of woodland which is part of the Badminton Estate in South Gloucestershire, which has a fair few deer living in it and is a great spot for wildlife photography. The problem is, it’s rare to find one here and if you do, it’s usually hiding in some brambles and trying not to be seen by the dozens of people and dogs that walk here every day. No matter what I tried (early mornings, late evenings, sitting in wait where I normally see them roaming), I could get anywhere near close enough to get a decent shot. That all changed, however, when I found a new walking spot.

I found a new place to walk, just outside of Yate, near Bristol. To get to it, you had to walk through a couple of livestock fields which I thought would put off most dog walkers. Thankfully, my dog doesn’t quite know what to make of big animals and just kind of stands there staring at them in disbelief. So we headed through the livestock and ended up at some woodland. Through the woods, we came to a series of maybe 10 fields. And there, just over the fence to our right was this beautiful stag. It was early in the morning, at around 7am so I assume he was out looking for breakfast.

He noticed us almost straight away, and Luna (my dog) noticed him. They stared at each other for a few second before he went about his business and kept foraging for food. I was lucky enough to get about 10 minutes to shoot him before he headed off somewhere else. I’m hoping that this spot remains less travelled by people so I can head back with a longer lens (although these were taken with a 400mm lens, so I possibly need an extender) in order to get some beautiful close up portraits of him. We did try to get a bit closer, but I think he felt safer with the hedgerow separating us. 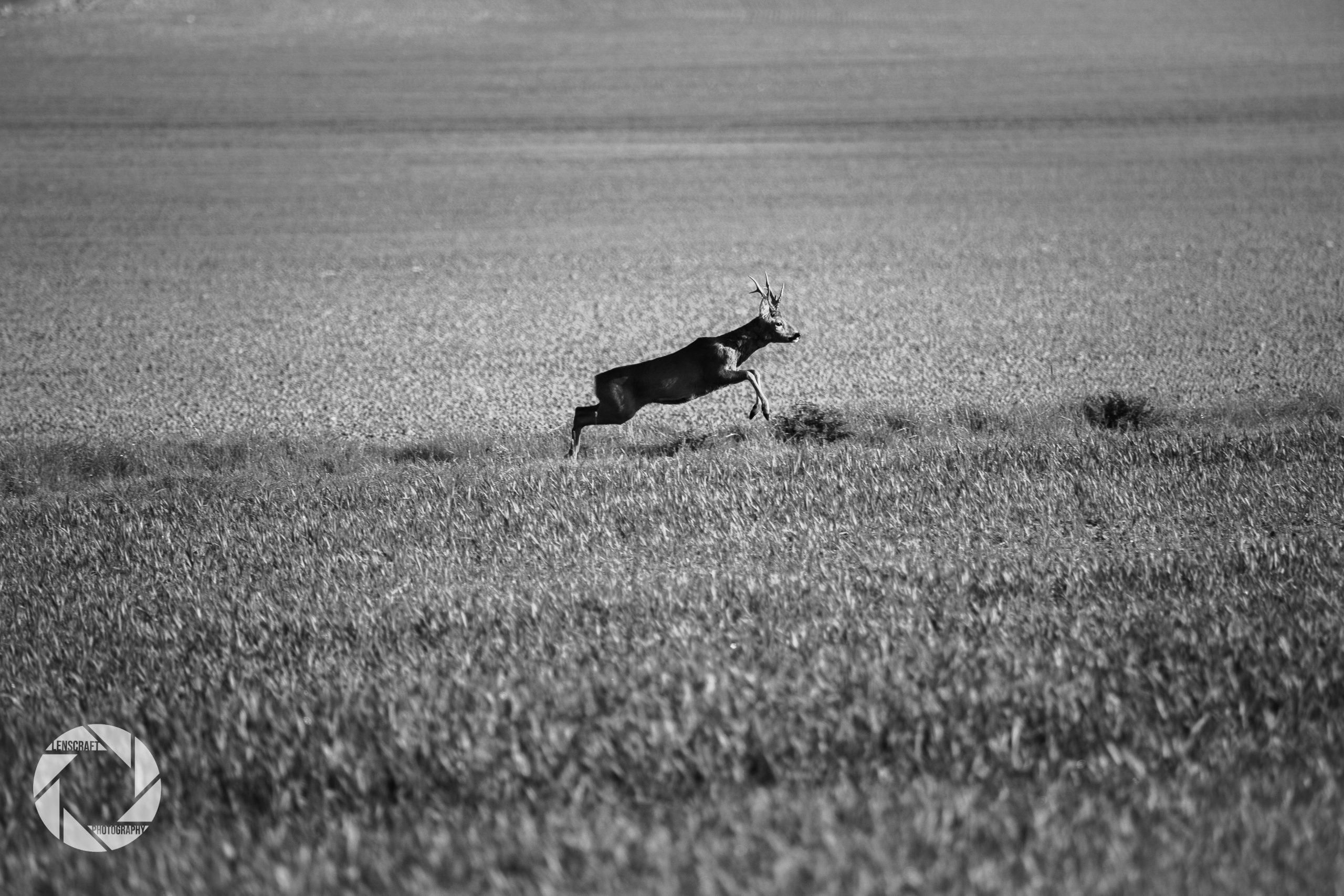 All of these images were shot on a Canon 5DIII with a Canon 100-400mm L lens. Various shutter speeds and apertures were used. All images are copyright of Lencraft Photography.

We use cookies on our website to give you the most relevant experience by remembering your preferences and repeat visits. By clicking “Accept All”, you consent to the use of ALL the cookies. However, you may visit "Cookie Settings" to provide a controlled consent.
Cookie SettingsAccept All
Manage consent

This website uses cookies to improve your experience while you navigate through the website. Out of these, the cookies that are categorized as necessary are stored on your browser as they are essential for the working of basic functionalities of the website. We also use third-party cookies that help us analyze and understand how you use this website. These cookies will be stored in your browser only with your consent. You also have the option to opt-out of these cookies. But opting out of some of these cookies may affect your browsing experience.
Necessary Always Enabled
Necessary cookies are absolutely essential for the website to function properly. These cookies ensure basic functionalities and security features of the website, anonymously.
Functional
Functional cookies help to perform certain functionalities like sharing the content of the website on social media platforms, collect feedbacks, and other third-party features.
Performance
Performance cookies are used to understand and analyze the key performance indexes of the website which helps in delivering a better user experience for the visitors.
Analytics
Analytical cookies are used to understand how visitors interact with the website. These cookies help provide information on metrics the number of visitors, bounce rate, traffic source, etc.
Advertisement
Advertisement cookies are used to provide visitors with relevant ads and marketing campaigns. These cookies track visitors across websites and collect information to provide customized ads.
Others
Other uncategorized cookies are those that are being analyzed and have not been classified into a category as yet.
SAVE & ACCEPT